This website lists the retro games created by myself, Kevin Thacker.

All games are created in my spare time with lots of help from others for graphics and music. I make these games for the fun of it. The games are listed from newest release to oldest. Some games are for sale and you can buy actual cassettes to load them from others are offered for free.

If you like what I do feel free to make a donation. All donations are appreciated!

Hexavirus is similar to the browser game "Virus 4".

The game presents you with a grid of coloured hexagons. There are 7 colours used. The hexagon in the bottom left is "infected".

Choose a colour from the side panel and all the hexagons of that colour which touch the currently infected squares are also infected.

The aim is to infect the entire grid before you run out of moves which is indicated by the number in the top-right of the game screen.

Originally I wanted to make a simple small game that would not take much time to develop. I asked Kukulcan and he suggested Hexavirus. However development took a lot longer than expected. The development stalled when I found that the game wasn't fun to play which was mainly due to the limited replay but also due to the method used to fill the grid which resulted in each move infecting very few hexagons making it slower to play.

I decided to finish the game and release it so I could move on to complete other games I have in development. Due to the game not being as I had originally though it would be, I have labeled it "v0".

Development started sometime in 2011 and finished when it was released on 29th December 2019.

CPCZVM is a port of ZXZVM a Z-Machine interpreter (originally for the ZX Spectrum and PCW) to the Amstrad. The Z-Machine is a virtual machine which plays Infocom's games or games made with the Inform adventure system. It was completed in December 2019 and was started around July 2019.

I have implemented two versions, the first runs under CPM2.2 or CPM+ (the Amstrad supports both) and a version that runs under BASIC.

I wrote it following a request for a port on the CPCWiki forum. I did it to show it could be done for the Amstrad and for the challenge of implementing a virtual memory system. 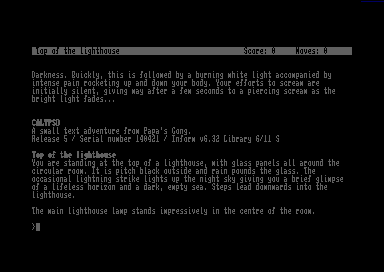 It is a conversion of the game of the same name for the Amiga and was requested by my friend Markus Hohmann.

This game was completed in about 8 months. Started in Februrary 2nd 2010 and finished on October 10th 2010.

This is the first game where:

To make this game I used Z88DK compiler v1.9, CPCRSLib with my modifications, my own libs and Starkos.

The graphics in the original Amiga version were heavily inspired, or even directly from the artist Hajime Sorayama. The Amstrad graphics were converted and adjusted from the Amiga version.

Sudoku is the game of the classic number puzzle game.

This is the first game which has sound composed for the CPC version specifically by a real CPC musician. (The tune for Balloonacy was converted from the C64 tune).

The initial inception of this game started as a Sudoku puzzle solver. The game stagnated for a while because I had difficulty making the Sudoku puzzle creator element of the game, but after finding a reasonable puzzle creation algorithm I started development again.

As of 3rd September 2008 the the game is now complete.

Amstrad CPC is the lead platform.

The final version will be available through Cronosoft.

"It would have been very easy for Kevin Thacker to write a very basic implementation of Sudoku... But he has put in the effort and come up with something really good for both the Amstrad and Speccy. ... There are a couple of excellent 'Oriental' styled music scores.... Overall, Cronosoft's Su-do'ku is a slick and addictive implementation of the paper based original" 9/10, Micro Mart magazine

Screenshots from Disc and Cassette Version

This is an arcade puzzle game. In each level you must move a balloon, first to a switch to open the exit, and then to the exit itself. The idea is simple, but the levels are challenging!

The original game was written by Richard Bayliss for the Commodore C64 and may be downloaded from his website The New Dimension: Richard Bayliss' website

As of the 21st November 2010 the full version is now free to download.

Reviews: "I really enjoyed playing this little game. The graphics are colourful and well drawn. Yes, the gameplay can be slightly difficult at times. But it's designed to be and that adds to the challenge. ..." Graphics: 64%, Sonics 52%, Grab Factor 75%, Staying Power 77%, Overall 71%, AA118, Amstrad Action Tribute Magazine, Summer 2008

This version was written for the Amstrad CPC with his permission.

The tape version has a Spectrum style loader including coloured bars in the border. It is the first game I have written using this type of fastloader.

Screenshots from Disc and Cassette Version 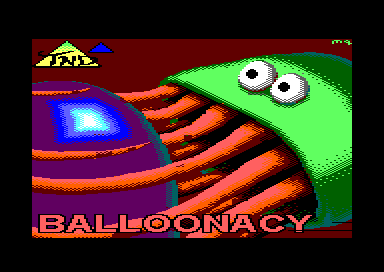 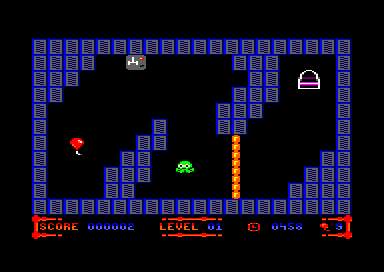 This is an arcade puzzle game. In each level you must move your character from a starting square, over each square and to the exit. The idea is simple, but there are 32 challenging levels.

The original was written by Bob Smith for the Sinclair Spectrum.

A demo and the full version can now be downloaded from his website (from Dec 2009): Bob's website

The full Spectrum version can also be bought through Cronosoft

This is the first game I have completed for the Amstrad computer.

Screenshots from Disc and Cassette version

Reviews: "the game has made its way to the CPC and now to the C64 - and on both occasions it has been thanks to the hard work of Kevin Thacker, with Richard Bayliss helping out with the C64 loader, music and sound effects... " 8/10, Micro Mart magazine

A few days after it's released it was cracked by a C64 demo group. Since then I have lost interest in writing any more C64 games.

On The Spot has been developed by Distinctive for use on the Liberate system. The game has subsequently been created primarily for this use but it's great fun to play on the web too!

Pheeep, pheep, phheeeeeeep! The final whistle in the World Cup Final blows and it's all over - except the game's a draw. You survived an extra time onslaught from your opponents but have you got the mental skill and calmness of mind to win on penalties? This is your chance, this is you - on the spot.

When you take a shot either a football (a goal) or a goalkeeper's hand (a save) will appear. The goalkeeper's hand will give you clues as to the whereabouts of any goals by way of a number in the top left corner of its square. This number tells you how many footballs the hand is directly next to. In the diagram shown on this page you can see that the square has a number two inside it because there are two footballs lying against it.

Using the hints provided by the save squares it soon becomes easier to guess where the footballs are hidden. With all this in mind, prepare to meet the ultimate footballing challenge....

Many thanks to Nigel Little (Owner of Distinctive) for giving me permission to put On the Spot on my website.